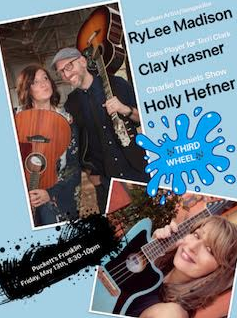 CLAY KRASNER is a respected Nashville touring musician who has toured as bassist and singing back up vocals for artists Lee Roy Parnell, Chely Wright, and currently with Platinum selling artist and Grand Ole Opry Member; Terri Clark. Clay also served as bassist and musical director for Brian Littrell, a member of the pop group; the Backstreet Boys. In addition to touring and recording sessions, Clay produces independent artists along side his wife, Canadian Artist RyLee Madison.

Canadian Country Music Artist RYLEE MADISON was invited to Nashville by Anne Murray’s publishing company to write with their staff writers, which began the splitting her time between Nova Scotia and Nashville. A few years later, RyLee received her first nomination for the ECMA Country Artist of the Year alongside none other than Anne Murray herself.

RyLee has released 4 studio albums, 1 live album, 2 EP’s, and has written 11 country music singles of her own and has received dozens of nominations and awards, including the 2005 Music Nova Scotia Humanitarian Award (for her volunteer work following Hurricane Katrina), Female Artist of the Year, Country Artist of the Year (three times!); East Coast Music Association Country Recording of the Year, and twice NACMAI Songwriter of the Year. Most recently she was inducted into the North American Country Music International Hall Of Fame in Pigeon Forge, TN.

RyLee and her husband Clay are also successful producers, working with other artists under their company 7-17 Music.

Country Music Artist HOLLY HEFNER has been the opening act for Country Music legends such as Loretta Lynn, George Jones, Lorrie Morgan, Tanya Tucker, and Keith Urban. She worked with legendary Record Producer Fred Foster (Roy Orbison), performed on national television shows, including; the National Anthem on ESPN, was a winning contestant on TNN’s BE A STAR and THE CHARLIE DANIELS SHOW, a “Shania Twain” impersonator in the “Tributes In Concert” production/show at the Stardust Theatre, has been featured in a number of music videos on CMT, GAC, and VH-1, and was the lead singer in popular Nashville Music Group The Willies Nashville. For many years, she was one of the Worship & Praise Leaders at Mega Church; Cornerstone Nashville. Holly also does actings and modeling with Acture Talent Agency, and has appeared in the Grand Hyatt Nashville commercials, the ABC series “Nashville”, a Hallmark Channel Christmas movie, and USA Network’s “Chrisley Knows Best”.