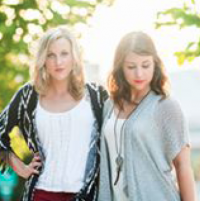 As artists wanting to relate with their fans, the decision to leave their hometown of Pittsburgh more than 500 miles in the rear view mirror is giving Sara Zebley and Hayley Prosser a lot to write about. The country-folk duo now known as Steel Blossoms decided to leave the shelter of Western Pennsylvania so that they may chase their dreams in Nashville, Tennessee.

Steel Blossoms, who are giving away free downloads of the band’s music at www.SteelBlossoms.com, have quite the story. In 2008, a chance meeting at a local festival in Western Pennsylvania (where they were both performing in separate groups) led to the very first conversation between Sara and Hayley. Fortunately, there was chemistry leading to a budding friendship because, years later, Sara found herself having to audition new singers for her band “Girlz in Black Hats.” That is when she reached out to Hayley.
The rest, as they say, is history. Sara and Hayley’s former band performed live multiple times each week and managed to build up a strong fan base throughout Western Pennsylvania. However, the decision to relocate to Nashville loomed and presented Sara and Hayley with many open doors. “There are performance opportunities every single day in Nashville,” Sara points out. “And that is at all hours of the day. We couldn’t play seven times a week in Pittsburgh because there aren’t enough thriving venues. I think we also needed to move away from normalcy to be able to dedicate ourselves to music 24/7.”
On August 29, 2014, the girls moved to Nashville and by September 1, 2014, they had rebranded and Steel Blossoms was created. Making the move a little bit easier was the fact that the two had already made several in-roads with folks living in Nashville, one of whom was former Taylor Swift manager Rick Barker. Barker is also the creator of Music Industry Blueprint, a development service teaching singers and musicians about the inner-workings of the music industry and how to market themselves via social media.
“The biggest thing that we have learned from Rick,” says Hayley, “is that this business is all about relationships, relationships, relationships.”

“He has also taught us how to use social media as a tool to connect with fans that don’t live near us,” claims Sara. “We want to know who they are and what they like so that our music can relate to what they are going through. That emphasis on communicating with fans and building up relationships doesn’t appear only on social media; it also shines through when Steel Blossoms perform live. Sara and Hayley are both quick to point out that the personal touch is something they are using to separate themselves from everybody else in a very crowded music industry. “The shows are conversational,” describes Hayley. “We really focus on positive vibes and greet everyone when they walk in the doors. We are there to make them happy and we aren’t afraid to tell people in the audience about our own lives and struggles.”

“We love laughing and having fun with the audience,” says Sara. “We are definitely serious about our music careers but our live shows still have comedy and substance.” In October 2015, Steel Blossoms released their very first EP album, “Year Number One,” which was 100% funded by fan pre-orders. They spend a good portion of their time traveling the country performing “House Concerts” for families they have met while performing in Nashville. Both Zebley and Prosser are optimistic about the future of Steel Blossoms. In a world where the majority is paralyzed by potential failure, both Sara and Hayley have refused to be intimidated. “I felt fear when we moved,” Sara admits. “Leaving all that I knew was terrifying but I just knew that I was going to thrive in Nashville.” “This town is full of incredible musicians and thousands of people in a mile who have the same goal as you,” says Hayley. “The biggest pressure is standing out.” But they are doing just that. One show at a time. One laugh at a time. One handshake at the door at a time.