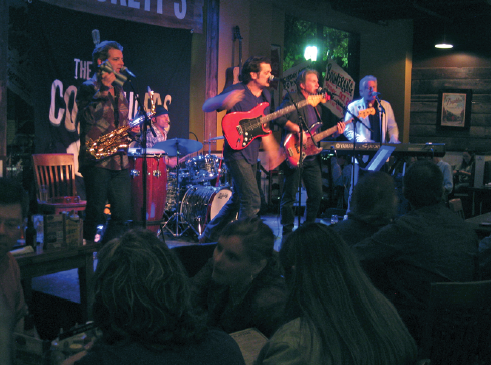 The ConSoulers debuted in May 2009 and have fast become known as, Nashville’s Premier Rockin’ Soul Band. They are currently recording originals for release in 2010. The ConSoulers are:

Steve Williams – Keyboards & Vocals – Toured with Kenny Chesney and more but his passion is writing. His #1, REDNECK YACHT CLUB” crossed over to become one of the most downloaded songs of 2005. “I GET TO” rose to the #1 spot on Christian Music charts soon after. His latest, “Where Have I Been All My Life”, is on George Strait’s “Twang”.

Tim Buppert – Drums & Vocals – Tim is one of Nashville’s most sought after singers and appears on albums for: Trisha Yearwood, Michael Peterson, Paul Brandt, Anita Cochran, Kevin Sharp and on jingles for Pepsi, Luvs and TNN. Trisha Yearwood, The Wiggins, and more have recorded his original songs. As a songwriter, his hits include ANOTHER NINE MINUTES” and “SHE’S SURE TAKING IT WELL.

John Foster – Guitar & Vocals John’s gifts caught the attention of Sammy Kershaw and the Beach Boys who hired him to take over the high falsetto vocals written and originally performed by Brian Wilson. The Charlie Daniels, signed him as a writer in 2000. His composition “I’m Not Breakin”, was a top-30 single for Curb Steve Holy.