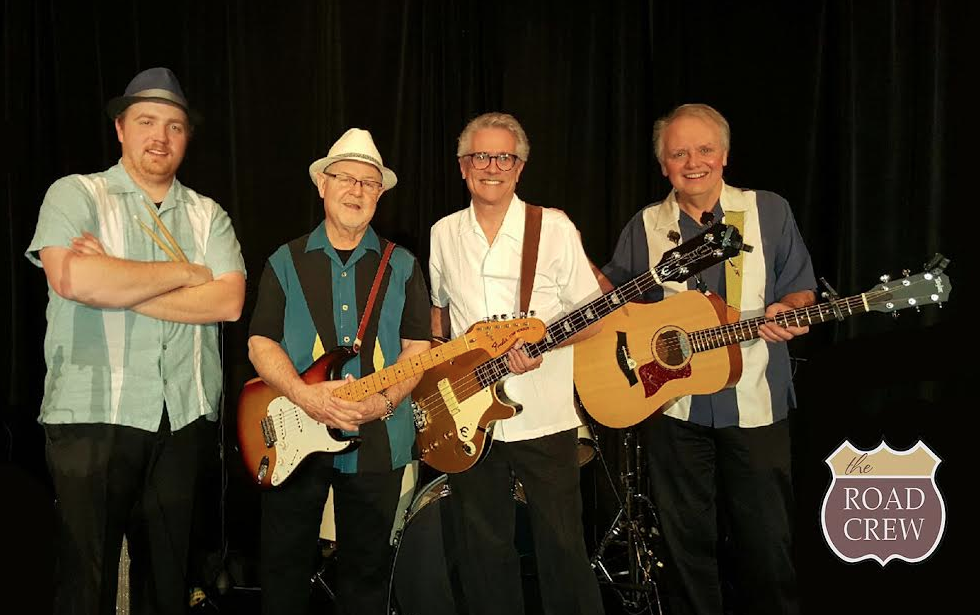 The popular Nashville, TN-based rockabilly band, The Road Crew, is an entertaining attraction wherever they perform along Route 66. They have played festivals and car shows in Litchfield IL, Cuba, Springfield & Joplin MO, Galena KS, Afton and Clinton OK and Amarillo TX. This August they will play the International Rt. 66 Festival in Kingman AZ. They have even done a few unplugged, sometimes impromptu, tour of smaller venues that included stops at places like Afton Station in Afton, OK and The Rock Café in Stroud, OK. The group was recently honored with the inaugural “Bobby Troup Artistic Acheivement Award” by the International Route 66 Association in recognition of their album, Songs from the Mother Road.

The Road Crew’s album, Songs from the Mother Road, is really a group of stories about the struggles, the joys, the heartbreaks and the adventures associated with Route 66. The musical styles include folk, country, blues, western swing and even a touch of surfer pop. The 12 original song titles include We’re Going West, Chair Of Rocks Park, The Motherland OK, Tucumcari Tonite, Running Down The Mother Road, The Old Way (For Angel) and That Ol’ 66. In tribute to the late Bobby Troop, The Road Crew even adds their (Beatles inspired) flavor to his classic hit (Get Your Kicks On) Route 66 as a special bonus track.

The group introduced their second CD, Rock-A-Billy Road, an album comprised of mostly upbeat 1950s classic songs that served as a soundtrack for travelers breezing down the highway during the heyday of Route 66. The album includes the theme song for the International Route 66 Association Festival, The Road To Amarillo, composed by Joe and Don.

If you run into them along the road, just know that you are meeting four guys who love the road, love the people and love the places they sing about just as much as you do. You can learn more about The Road Crew on their website, roadcrew66.com.