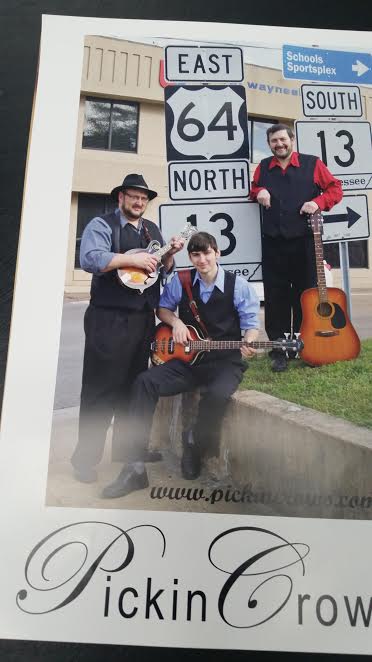 The Pickin Crows is a Folk/Country/ Americana music band with deep Tennessee roots. The band members hail from Waynesboro Tennessee led by guitarist Steve Jackson with Tony Love on the mandolin followed by Riley Jackson on the bass guitar.

Steve Jackson ,the lead guitarist of the group, has been playing and performing since the early age of twelve, being heavily influenced by his father Lester Jackson an accomplished musician in his own right who collaborated with country music great Melba Montgomery. Steve himself has managed to put together and develop a unique group of musicians unlike any the industry have seen or heard before.

Fellow Musician Tony Love is a self proclamed musician patterning his style after the likes of Bill Monroe and Marty Robbins. Like lead guitarist Steve Jackson, Tonys’ interest in music began at an early age. Tony brings a dramatic flare to the group with his unique style of mandolin playing and backup vocals.

Riley Jackson the youngest member has already begun to be recognized in the industry as an up and coming bassist, with his uncanny ability to play just about any style of music by ear.

The Pickin Crows has entertained thousands of people over the years, giving freely to charity events and other worthwhile causes. The band philosophy is to give to the community who supports you in return the band will reap the benefits from their effort. With this philosophy in mind the band has had the opportunity to meet many grateful and adoring fans.

The Pickin Crows hope they will cross your path in the near future and will be able to share their love of music with you. We look forward to seeing and connecting with you soon.