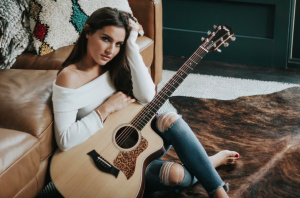 Olivia Faye is a country/pop singer/songwriter and actress who hails from Murray, Kentucky. Growing up in a family of music lovers, her musical stylings pay homage to many of the early icons of country music, blues and classic rock.

Olivia moved to Nashville at 19, and quickly acclimated to a life in Music City as a songwriter and performer. Her smooth, bluesy vocals and catchy tunes have won her numerous invitations to perform throughout Nashville and beyond, her favorite being Puckett’s of Leiper’s Fork, Tennessee where she is a regular.

Olivia has been a featured opener for Alabama, Mark Chesnutt and Paul Thorn. She was just named as one of the best-up-and-coming talented artists to watch on Nashville Rising’s Spotify playlist.
Check out her new music that was just released and her worldwide premiere of her music video “Save My Number”, on CMT!

Nicole Croteau is a singer/songwriter based in Nashville, TN. Growing up in a small town in Montana, she grew a love for country music and storytelling. While fallin in love with writing for the first time at the age of 13, she took 3rd place in the Colgate Country Showdown, and then went on to sign a record deal at the age of 19 with an LA based label. For the past 6 years she has been focused primarily on songwriting in the Country music industry in Nashville. More recently Nicole has started exploring her career as an artist again and is getting ready to release original music. 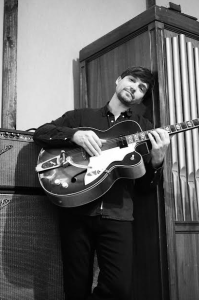 Producer, songwriter and composer Johnny Hanson aka “Walker Reinhardt” works and lives in Nashville, TN. As a producer, Johnny has worked with Christina Perri, Molly Kate Kestner, The Monroes, Shannon Purser, Brynn Elliott, Mabilene, Man of Leisure, Georgia Greene and Paris Carney’s project O’Neill Hudson to name a few. As a guitarist and vocalist he has toured and performed with many artists, including Christina Perri, The Neverly Boys, Brynn Elliott, Jason Mraz, Demi Lovato, Conrad Sewell and Lenka.

He has had songs placed in major network television shows such as CW’s drama series “In The Dark,” MTV’s “Teen Mom,” “One Tree Hill” and “Children’s Hospital.” He has also written original songs specifically for many shows including “Nashville,” “Switched at Birth”, “Greenleaf” and Yippee TV’s upcoming children’s series “Maggie’s Market.” On the composing side, he has written cues for NBC’s “Better Late Than Never,” Netflix’s “Lady Dynamite” and original scoring for short and full feature films including 2018’s festival favorite short Secret Sweets. The film took home the award for Best International Short Film at the Catalina Film Festival.

Additionally, Johnny occasionally coaches guitar for film and television – he coached Bradley Cooper prior to filming his leading role in the Oscar winning film A Star Is Born, Jovan Adepo for his role in Stephen King’s “The Stand” for CBS All Access, Mary Kay Place for Netflix’s “Lady Dynamite,” actress Lea Thompson and “High School Musical” star Lucas Grabeel to name a few. Johnny owns his own studio in Nashville, TN, where he does most of his recording, composing and producing. Having already had personal success and radio play with his band Melanoid (2009’s Asleep in the Wake EP and 2013’s Jamais Vu EP), he regularly releases music under his newest personal musical project Walker Reinhardt. The latest single “Same Drum” is now available. He is currently focused on producing and songwriting and is regularly taking on new projects.