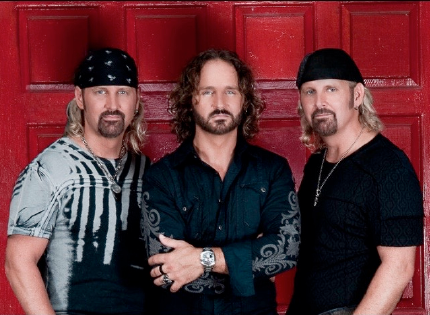 What strikes you almost immediately upon hearing the sound of the Kentucky Linemen’s music, is how utterly distinctive it is. Distinctive, yet familiar. Recalling tinges of The Gatlins and Alabama, the Kentucky Linemen’s harmonies are a driving force behind their signature sound. In an ocean of pop and teen influenced country music recurrently being produced in Nashville, the Linemen’s sound is a vessel of true country authenticity. Music Row Magazine’s Robert K. Oermann said; “Hearty harmonies are the hallmark here. [Kentucky Linemen] sing with immense gusto, and the hooky, mid-tempo song [“Walk On”] is a solid, rolling winner.” Oermann declared the boys Music Row Magazine’s DisCovery Award Winner in July of 2010. For as long as they can remember, the Fletcher brothers, twins Jon and James and younger brother Mitchell, have been singing and playing music together. One could argue that there wasn’t a single person within earshot of the siblings who would come to be surprised that the boys set out to pursue a career in music, not only as performing musicians but as performing songwriters, as well. Born and raised in a close-knit household in Boyle County, Kentucky, their dad, Hershel, was a lineman for the Kentucky Utilities Company. The band’s moniker is a salute to the solid and stable roots that their father’s hard work as a lineman provided to their upbringing. Theirs was a home that had always been traditional in values and supportive of their talent. Music was a vital ingredient in their upbringing, with their mom and dad often joining in with them vocally, and on dobro (mom) and banjo (dad). In addition to their vocal abilities, the band of brothers are accomplished musicians: Tenor James is a guitar player, Baritone Jon is a drummer and mandolin player and lead singer Mitchell plays bass and acoustic guitar. The Kentucky Linemen are currently putting the finishing touches on their 2nd album “Whiskey and Money” with a tentative of Mid-March 2018. Initial album reviews range from “spectacular” to WOW to “It’s About Damn Time Someone Puts Out A Real Country Album. Hard working and persistent, these talented brothers have made the journey of a thousand miles to get to where they are now and they show no signs of slowing. Some folks were born with music in their blood and for the Kentucky Linemen, that heritage is in full force times three. So hold on tight, there’s a hurricane coming and they’re called The Kentucky Linemen!