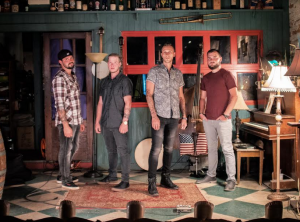 From New Jersey to California there are more than a few Monroevilles dotting the countryside. When it comes to engaging, original, and multi-faceted blends of energetic country, folk, bluegrass, and alternative music, though, no one can doubt that there’s only one Monroeville on the map.

Named in honor of legendary bluegrass musician Bill Monroe and fronted by GRAMMY nominated band leader/owner Matt Munsey, the band also features the stellar songwriting and vocals of his wife Brittany, versatile utility musician McCoy Borg, jack-of-all-songs Chevy Watson on guitar, and amazing bassist Kyle Dillow. Monroeville has been playing to growing crowds of fervent fans at popular local venues and at the most prominent bluegrass festivals nationwide. With a live sound so pure, tight, and crisp it sounds like a flawless studio recording, the group continues to rise in popularity and gather devotees from across borders and musical genres.